I also had a cup of caffeinated tea and Lee had his usual instant coffee drink. November 30, at 3: I was getting tired but I could have run farther, which surprised me. My maniacal organization tendencies kicked in, as they always do for activities like this, so i had everything packed up, laid out and ready to go the night before. Only 58 people participated in the Olympic distance race, making the transition are and racecourse seem pretty unpopulated. I guess it was just a big course.

We had a hotel room full of 2 bikes, a small dog, and lots of gear. The road was rough!!! It was an out and back course so plenty of super fast people passed me going back the other way. The cold water and race butterflies really messed with my stroke and speed in the first two sides of the triangular course. I also had a cup of caffeinated tea and Lee had his usual instant coffee drink. The 65 degree water ended up being a toastier choice.

A Recipe Swap and a giveaway! Home pleased to meet you. Lee started first and the women were off a few minutes later.

I have a separate bottom and lak and the top did ride up a little. There was plenty of parking, thankfully. I was really in the groove by the end of the first lap and the second one flew by…not that I was actually swimming very fast.

I was done and I was proud! I was toasty warm…except for my feet.

It felt slow and my poor body was rattled to death by the end of the ride. Back to the night before. I wanted off that bicycle seat! Our first choice for dinner, Chipotle, was closed so we had a crappy dinner at some chain Japanese restaurant. I mostly tested it out by taking a few strokes.

The rest of the course was a flat, out and back run on a paved road. We had thought about biking over to the start from our hotel, lakke was very close, but that would have deprived us of a car to stash things in so we drive instead. 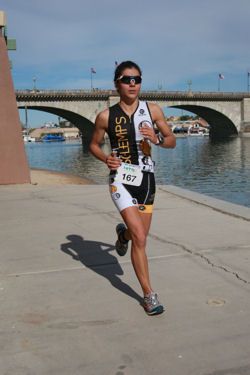 Ah, the bike, what can I say? There was a kiddie pool for rinsing feet at the entrance. I took water at the first aid station, more water at the turnaround point, and third cup at the aid station on the way back. Lee met me at the finish line, having crossed in 2: I also had a cup of caffeinated tea and Lee had his usual instant coffee drink. I chugged along and tried to take in the scenery. Sorry, your blog cannot share posts by email. They blasted down the hills on their bikes that sound like triathoon engines, looking like they were barely tired.

The run course started with a jaunt up some stairs to the famous London Bridge, across the bridge, down more stairs, under the bridge, upstairs on the other side, and then finally back across the bridge to the rest of the run course. Our dog, Doc, came along on this trip and stayed in the hotel room during the race. Only 58 people participated in the Olympic distance race, making the transition are and racecourse seem pretty unpopulated. I think one of the biggest areas I could improve on is the first 5 minutes of the swim.

We could either stand on cold sand, tirathlon cement, or cold grass. The wetsuit came off easily but it took me longer to get out of there yits usual. One particularly speedy woman passed me right before havqsu finish, which I saw coming.

After setting up our transition areas, visiting the bathroom several times, and scoping out the lake, we donned our wetsuits and I stashed my jacket and uggs in the car.

Oddly enough, I think the transition from bike to run is my favorite part of the race. We both started the day with peanut butter and bananas plus half a bagel for Lee from home.

We had a hotel room full of 2 bikes, a small dog, and lots of gear. There were a lot of memorable things about this race and it marked several firsts in my triathlon experience.

It gave me the chills to see runners out there in the dark, still not done with their race!

The remaining time before our start was pretty unpleasant. It took all my brain power to get those stickers in the right places and I totally failed with one of the tattoos the morning of the race.

You should be proud! Triathlons are one of the few things that make me feel very accomplished!